Toyota’s production facility in Onnaing, located in northern France, manufactures up to 1,200 Toyota Yaris a day in an exceptionally streamlined process that optimally utilizes every second. In September 2019, an End-of-Line solution with automation from AP&T was installed, which will guarantee fast and highly effective handling of formed sheet metal parts. In just a little over a year it has become apparent that the equipment has fulfilled all expectations.
After their initial contact with AP&T at EuroBLECH in 2016, Toyota became interested in the company.
“We were looking for a European partner for this project and AP&T's modern, but mechanically uncomplicated products were very appealing,” says Rémi Delimal, Project Manager at TMMF, Press Shop, Body Division.
And thus, three years later, an End-of-Line stacking system was installed.
The equipment consists of a shuttle system that receives parts from an existing transfer line and a SpeedFeeder with a servo-driven gripper for fully automatic changeover between different products. The SpeedFeeder takes parts from the shuttle system and stacks them in a fully automated pallet system. The equipment was delivered complete with a line and safety integration. The press runs at 25 strokes/min and even dual parts are produced at 23 strokes/min. The cycle time puts very high demands on the equipment.
“The high speed makes it difficult time wise to move each part individually. Instead, several parts are stacked in a fixture and then all are moved in a single step. The entire cycle is not allowed to take more time than it takes to fill up the fixture again,” says Peter Karlsson, Key Account Manager at AP&T.
The short cycle time is not the only challenge posed by the project. Over 30 different parts are manufactured in the line, and change-over from one product to another must be fast. A gripper change may not take more than 180 seconds.
“We solved this issue by simply using one gripper for all of the different products. Instead of physically changing the gripper, the operator can change the programs for different products through the line’s HMI (connected to the product recipe), which simplifies the process and significantly shortens the customer’s change-over timing,” says Peter Karlsson.
For AP&T's part, it wasn't only a matter of living up to the high requirements Toyota has on equipment performance but also to live up to high requirements on the installation itself.
“For us it was key that the installation be done when the factory was closed so it wouldn’t impact manufacturing. We only had three weeks to get the automation equipment in place and to integrate it into our existing press line. Everything went smoothly and was finished according to plan. The equipment has truly delivered since day one of operations – it has exceed our expectations on productivity and reliability. This was our first project together, and I must say that AP&T has done it well, from the solution design to the support we get in the form of service, spare parts and technical support,” says Rémi Delimal.
“Being entrusted to supply equipment to one of the largest car manufacturers in the world is an important step for AP&T. This means new opportunities, and further strengthens our position in the automotive industry,” says Peter Karlsson.
Facts
AP&T’s solution includes a four-axis SpeedFeeder press robot with a specially designed gripper and a shuttle/fixture solution. All of the components are based on AP&T’s well-proven and standardized modular system.
The new End-of-Line solution was installed at Toyota’s production facility in the late summer of 2019. 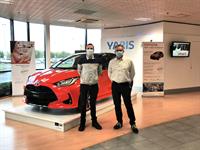