With AP&T’s production technology for hot forming of aluminum, body components which traditionally consist of several joined parts can be formed in a single step. This technology enables net shape forming and thus also reduced production time and costs for car manufacturers. To demonstrate the possibilities, AP&T conducted a development project in order to design and manufacture a new tool for complex hot forming.
The outcome of the project is a concrete example of what AP&T can offer the automotive industry in terms of efficiently building lighter and safer cars to reduce CO2 emissions and the impact of additional system costs for electrification.
"The objective was to produce a car door ring out of a single piece of hot-formed aluminum in AA6xxx and AA7xxx – a challenging assignment from both a technical and a quality perspective,” says AP&T Manager Development Processes & Tooling, Dr. Michael Machhammer.
A conventionally manufactured door ring component with a conventional design usually consists of several individually shaped parts that are ultimately joined together. The task for AP&T’s development engineers in Ulricehamn involved designing and producing a demonstrator part that exhibits a high degree of complexity, which is also required for net shaped door ring and door inner components.
To determine the part geometry, FEM sheet forming simulation was used in several design loops to find the most complex shape. The required input data for the FEM sheet forming simulation, such as material properties that are dependent on temperature, heat transfer between the tool and the hot sheet as well as the tribological characteristics during forming were determined beforehand in several development projects. The tool itself was subsequently manufactured and tested in AP&T’s production tryout line for hot forming of high-strength aluminum.
"The development project was successfully carried out within a strict time and budget framework. In addition to demonstrating the enhanced formability that arises when using hot forming to produce high-strength aluminum parts with a complex shape, the knowledge gained offers high value in current and upcoming customer projects", says Michael Machhammer. 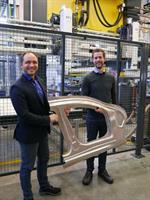